Yttrium aluminium garnet (YAG) is a synthetic crystalline material of the garnet group.

YAG for a period was used in jewelry as a diamond and other gemstone simulant. Colored variants and their doping elements include: green (chromium), blue (cobalt), red (manganese), yellow (titanium), purple (neodymium), pink, and orange. As faceted gems they are valued (as synthetics) for their clarity, durability, high refractive index and dispersion. The critical angle of YAG is 33 degrees. YAG cuts similar to natural garnet, with polishing being performed with alumina or diamond (50,000 or 100,000) on common polishing laps. YAG has low heat sensitivity.

As a synthetic gemstone YAG has numerous varietal and trade names, as well as a number of misnomers. Synonymous names include: alexite, amamite, circolite, dia-bud, diamite, diamogem, diamonair, diamone, diamonique, diamonite, diamonte, di’yag, geminair, gemonair, kimberly, Linde simulated diamond, nier-gem, regalair, replique, somerset, triamond, YAIG, and yttrium garnet. Production for the gem trade decreased after the introduction of synthetic cubic zirconia; as of 1995 there was little production. Some demand exists as synthetic garnet, and for designs where the very high refractive index of cubic zirconia is not desirable.

Cause of Color : Chemical Composition :

Y.A.G. is a man made material with a garnet internal structure. The term synthetic is not used to refer to this material since it does not have a natural counterpart. 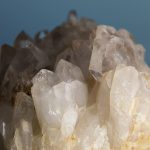