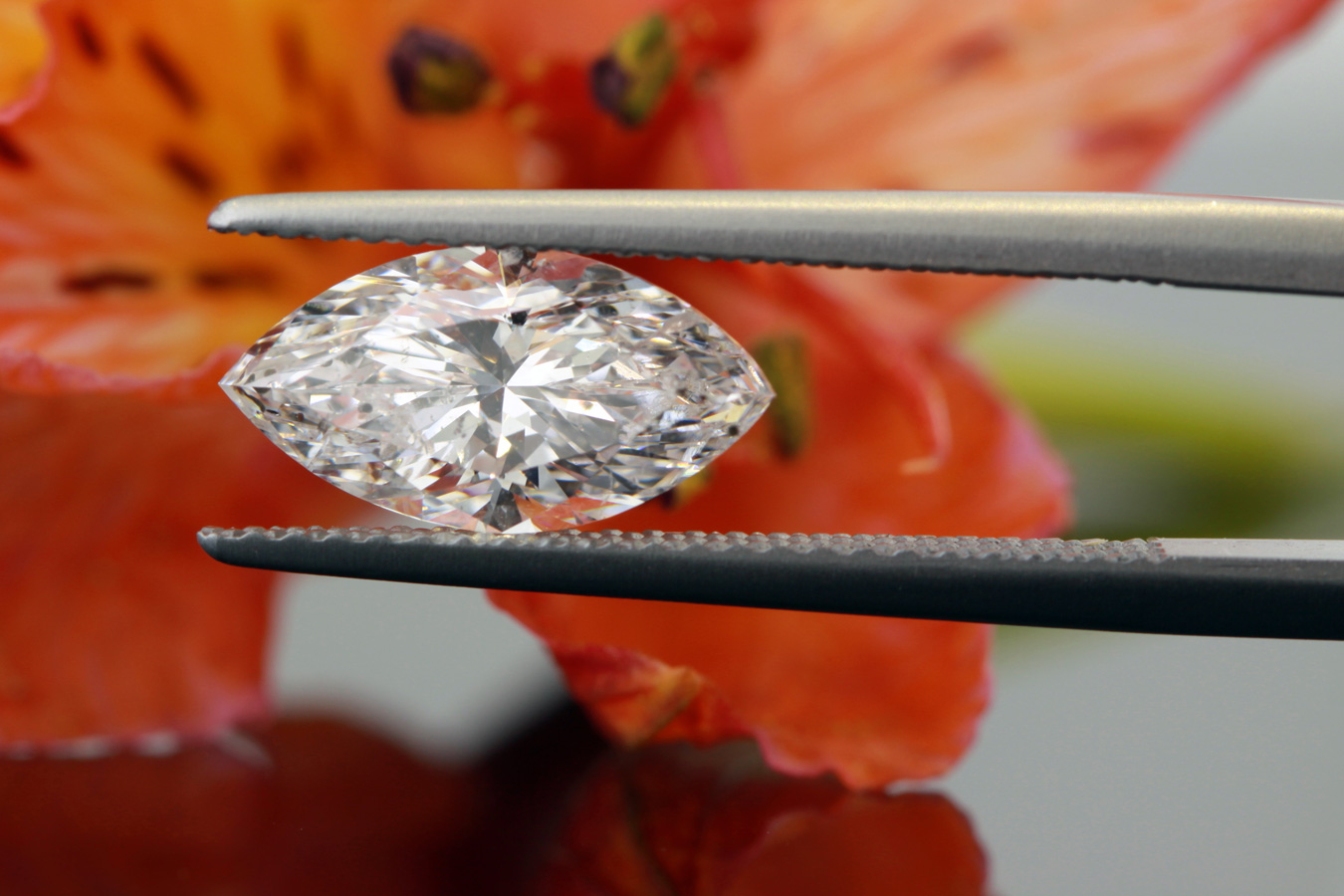 Diamonds have been sought after by scores of people around the world for their beauty, value and usefulness for the past few centuries. Aside from making for extremely beautiful jewelry, diamonds are also used in several other areas, such as industry tools and sound-related machinery. Some people even swear by their effectiveness in beauty products like facials. However, these carbon-based crystals are far more interesting than we know them to be. Here are thirty facts about diamonds that will leave you fascinated at the different ways in which they are present in our lives.

1. A Diamond Is the Hardest Substance on The Planet

Diamonds are roughly fifty-eight times harder than any other substance found on the earth. Their composition and structure make them so dense that they can be cut only by another diamond, and nothing else.

2. ‘Diamond’ Comes from A Greek Word

The word ‘diamond’ is derived from ‘adamas’ which the Greek word for is ‘invincible’ or ‘indestructible’. It is likely that the word was chosen because of the nearly indestructible nature of diamonds.

Natural diamonds are formed after an extremely long process that spans over a billion years, making them extremely old by the time they make it to the surface and are shipped off for cutting and polishing.

4. Diamonds Are Almost Completely Made Out of Carbon

Diamonds are basically soil subjected to extremely high temperatures and pressures over an extended period of time. This process causes the carbon atoms to bond with each other in a way that it becomes the hard substance it is known to be.

Diamonds are commercially available in different shapes that jewellers specifically cut them into for aesthetic purposes. Popular cuts include round brilliant, emerald, oval, princess, marquise and pear shaped.

In several cultures, astrologers place a high importance on diamonds. Emphasis is also put on details such as the cut of the stone, the size, the finger it is worn on and many other such nuances. Diamonds have also been associated with ruin for people of certain signs of the zodiac.

Although mostly white or clear, diamonds have also been known to form in colors other than white. These stones occur very rarely in nature, but have formed in yellow, brown, pink, purple, blue, red and many, many others. The Zoe Diamond, the most expensive diamond ever sold, was auctioned off at a whopping thirty-two million dollars.

Scientists create artificial diamonds using techniques that are similar to the natural process involved in the making of diamonds. Termed as HPHT diamonds or CVD diamonds depending on the method of preparation, these diamonds are used in several ways, including as part of cutting tools.

9. Diamond Dust Was Used as A Method of Killing People

Diamond dust, although seemingly harmless, is simply a finer version of an extremely hard and sharp substance. When ingested, it can cause serious internal injury that can lead to severe ill health, and in the worst-case scenario, death. History is full of examples of people who have used diamond dust to either murder someone else or commit suicide.

10. Roman and Greek Beliefs Around Diamonds

The ancient Greeks and Romans believed that diamonds were either the tears of the Gods solidified, and the Romans also believed that Cupid, the god of lust and attraction, had arrowheads made out of diamonds. This could be the origin of the common association of diamonds with love.

11. Diamonds as A Source of Strength and Courage

Many cultures believed that diamonds supplied the wearer with much needed strength that was needed during battle, prompting them to fit diamonds into the armor of soldiers, hoping to give them the support they would need in dire situations.

12. Diamonds Can Be Found in The Flame of a Candle

Dr. Zhou Wuzong, from the University of St. Andrews in Scotland, discovered that a single candle flame contains about 1.5 million diamond nanoparticles for every second that it burns. Scientists are now looking into this discovery and trying to discover a cheaper means of creating diamonds artificially.

13. Ashes Can Be Turned into Diamonds

Memorial diamonds, which are artificial diamonds made out of the ashes and, in some cases, the hair of departed loved ones, are offered by several companies in the US, as well as companies from certain countries in the UK.

14. There Are Diamonds in Space, And One of Them Is Called Lucy

The popular Beatles song is not about this particular diamond; rather, scientists named the star Lucy, after the song. The star is said to be a diamond of ten billion trillion carats. On the other hand, 55 Cancri E, a carbon planet with a diamond core, is located roughly fifty light years away from the earth and revolves around a star in the Milky Way.

The largest rough diamond of gem quality to be found in history, the Cullinan diamond was found in a mine in South Africa in the year 1905. It weighed three thousand one hundred and six carats when it was found. The stone was cut into a hundred and five pieces, many of which are currently owned by Queen Elizabeth II.

16. Diamonds Were Once Collected Rather Than Mined

Diamonds are formed several kilometers under the earth’s surface and are then pushed up to the surface of the earth because of underground volcanic activity. These diamonds eventually found their way into water bodies like rivers, where they were picked up by people, found either at the bottom or at the banks of the rivers.

17. Diamonds Were Not Always Available to The Public

Diamonds used to be a status symbol for the rich and the powerful of the medieval times, most commonly the monarch or king. This was during a time when diamonds were extremely rare, and the possession of a diamond by a commoner was, in certain places, a punishable offense. However, this changed when the diamond mines were discovered in South Africa.

18. Diamonds Lose A Large Part of Their Volume in The Cutting and Polishing Process

Rough diamonds, when removed from their place of origin, resemble little more than thick chunks of either clear or colored glass. To give them the beauty that we see and recognize, jewelers cut the diamond and then polish it, which results in a loss of at least fifty per cent of the diamond.

19. Certain Diamonds May Be of Extraterrestrial Origin

Carbonado diamonds, also popularly known as black diamonds, are rumored to have originated from a supernova that hit the earth’s surface (after splitting into two) in two places, namely Brazil and the Central African Republic, which are the only two sources of black diamonds. This theory, however, is not widely accepted in the scientific community.

20. Although Extremely Dense, Diamonds Can Be Split

Scientists use highly specific and accurate machinery to find the weak spots in the structure of a diamond, and when placed just right, these machines are capable of splitting a diamond in one single strike. However, these weak spots are extremely rare and hard to find.

21. A Park in The United States Allows You to Dig Up Your Own Diamonds

The Crater of Diamonds State Park in Murfreesboro, Arkansas, is the one place in the entire world where you have the option of getting your nails in the dirt and trying to dig up a diamond for yourself.  Several lucky diggers have managed to find a diamond to take home, the biggest one being the Uncle Sam diamond, which was found in the 1920s.

22. A Diamond Formed Is Only A Millionth of The Volume of The Solid Rock It Is Comprised of

The only way to understand exactly how intense the compressive energies that are involved in the process of diamond making are, is to appreciate the fact that a million units of mined rock, get heated and compressed into one single unit of diamond. That really puts a whole new meaning to the term ‘one in a million’.

23. Diamonds Are Being Mined More and More Each Year

Diamonds have tons of uses, and this means that the demand for them is growing by the day. In response, diamond miners are uncovering roughly a million carats of diamonds every year, and that figure is steadily growing. In addition, over a hundred thousand tons are being synthetically created in labs every year.

An Australian study from the year 2015 studied the possibility of the usage of diamonds in detecting the presence of cancerous tumors in their early stages. Diamonds have the ability to light up cancer cells that could normally be hard to detect using conventional methods available in the field of medicine.

25. New York City Sells Around 80% Of the World’s Diamonds

Most rough diamonds are shipped off to Antwerp in Belgium (which is commonly referred to as the Diamond capital of the world) where they are processed, cut and polished. Immediately after, they are sent to New York City, where they are most likely to get auctioned off at one of the many famous auction venues in the city, or at Diamond Ring Store NYC.

26. An Irish Man Swallowed A Diamond Ring in an Attempt to Steal It

Ian Campbell, an Irish man who was on vacation in Turkey, stole a ring from a jewelry story and swallowed it when he was afraid, he would get caught. He was hospitalized when the ring began to cause damage to his internal organs and had to remain in the hospital for 36 hours before the ring was removed.

According to tradition, engagement rings are worn on the fourth finger or the ring finger of the left hand because that finger contains what people believe to be the vein of love. This belief has its origins in Egypt.

The Archduke Maximilian of Austria is the first known individual to present an engagement ring; he gifted a gold ring with an ‘m’ formed of diamonds to his lady love, Mary of Burgundy.

29. Diamonds Are Not Mined in Europe and Antarctica

Every continent has some countries that mine diamonds, but none of them are in Europe or Antarctica. This is ironic considering the fact that Antwerp in Belgium is considered as the diamond capital of the world.

30. The Harry Winston Legacy Was Bought for Fifty Million Dollars by Auction

Formerly called the Pink Legacy, the nearly nineteen carat pink diamond was bought by the luxury jewelry brand Harry Winston at the auction at Christie’s which boasted the biggest pink diamond it had ever sold in history. The color of the diamond was termed ‘vivid’, which was considered astonishing considering the size of the stone.

Who knew that diamonds were such interesting creations? Perhaps the world of diamonds will show us many more wonders to come. Only time will tell.