Common theory holds that the name agate is in fact a linguistic derivative of the Sicilian River Achates. Regardless, knowledge of its existence has been documented for thousands of years. Not only did the Greek philosopher Theophrastus mention it as early as 300 B.C., but the early Byzantines were said to also have knowledge of how to color it through exposure to heat.

Like many precious and semi-precious stones, agate has been used throughout history for a variety of medicinal purposes. One of the primary uses has been to reduce discomfort in both mother and child during pregnancy. It is also said to be useful for reducing headaches, dizziness, and even impaired balance.

A key stipulation however is that the stone must be in physical contact with the skin around the area suffering from the affliction. For example, to combat feverish infections it is important to place the stone on the heart or the throat chakra. This works for any variety of infections or simple inflammation, such as contact with weary or tired eyes.

It is said that agate possesses many mystical powers. One of these powers is the ability to permit the user to distinguish between honest and false friends. It can also allow the young to avoid danger, direct violent weather away from the bearer, and avert miscarriages.

Each of the colors of agate is associated with a specific chakra. For example, the red agate is closely related to the chakra of the solar plexus. On the other hand, blue agates are powerfully connected to the throat chakra.

It is recommended that if a Taurus or a Capricorn is interested in increasing their willpower seek the use of an agate. This is also generally recommended for Scorpios.

The best way to utilize an agate is to place it in direct contact with the skin. Properly cleansing involves placing it directly under warm running water and exposing it to direct sunlight in order to recharge its energy.

Meaning of other varieties of Agate 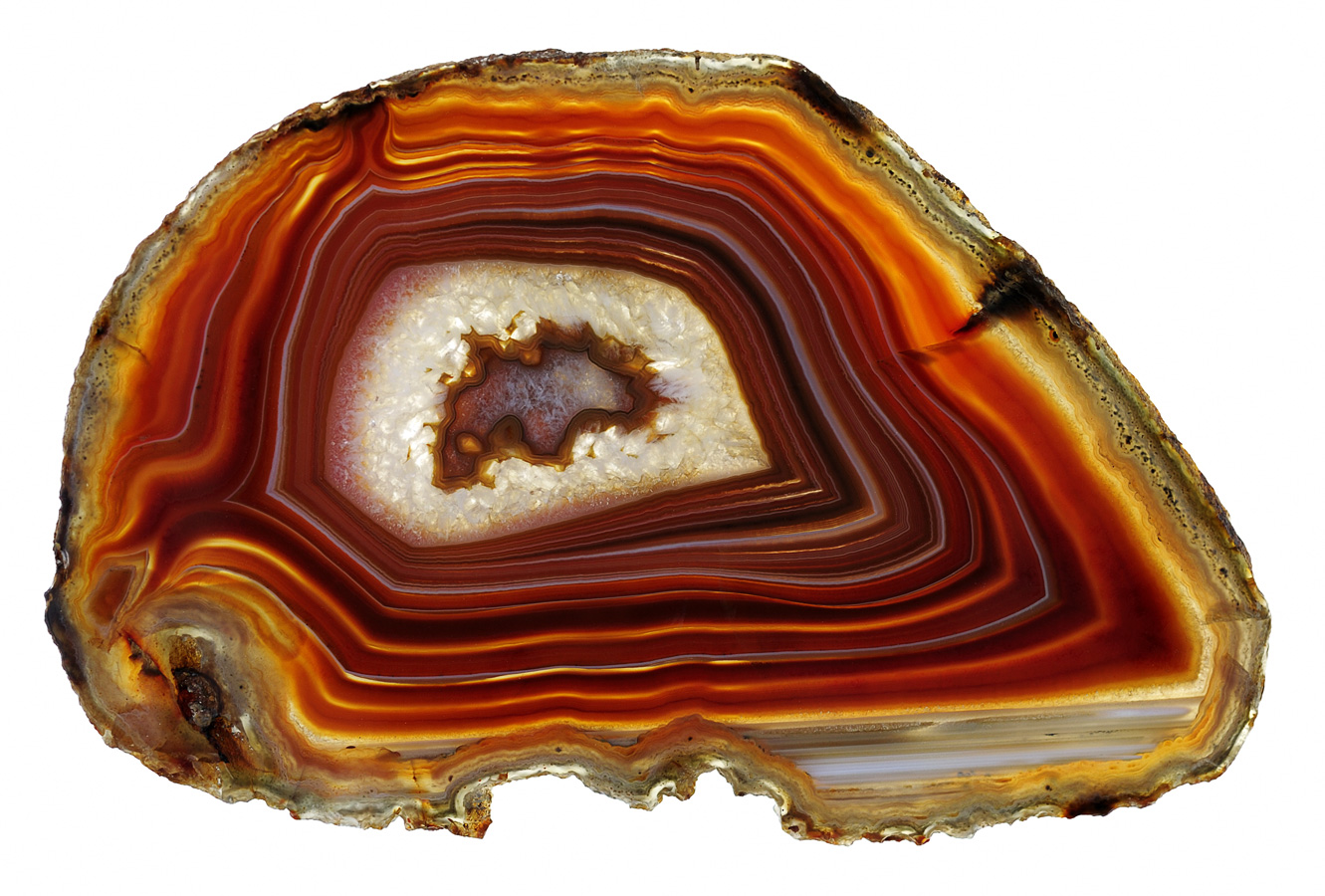 Banded agate exists in a wide range of colors and shares its closest connection with the chakra of the throat. Usage of this type of agate is best for those who are seeking a creative answer to a complicated problem. It also is extremely potent when it comes to inspiring creative expression. Finally, it provides the wearer with the ability to adhere to their core spiritual beliefs in the face of adversity. 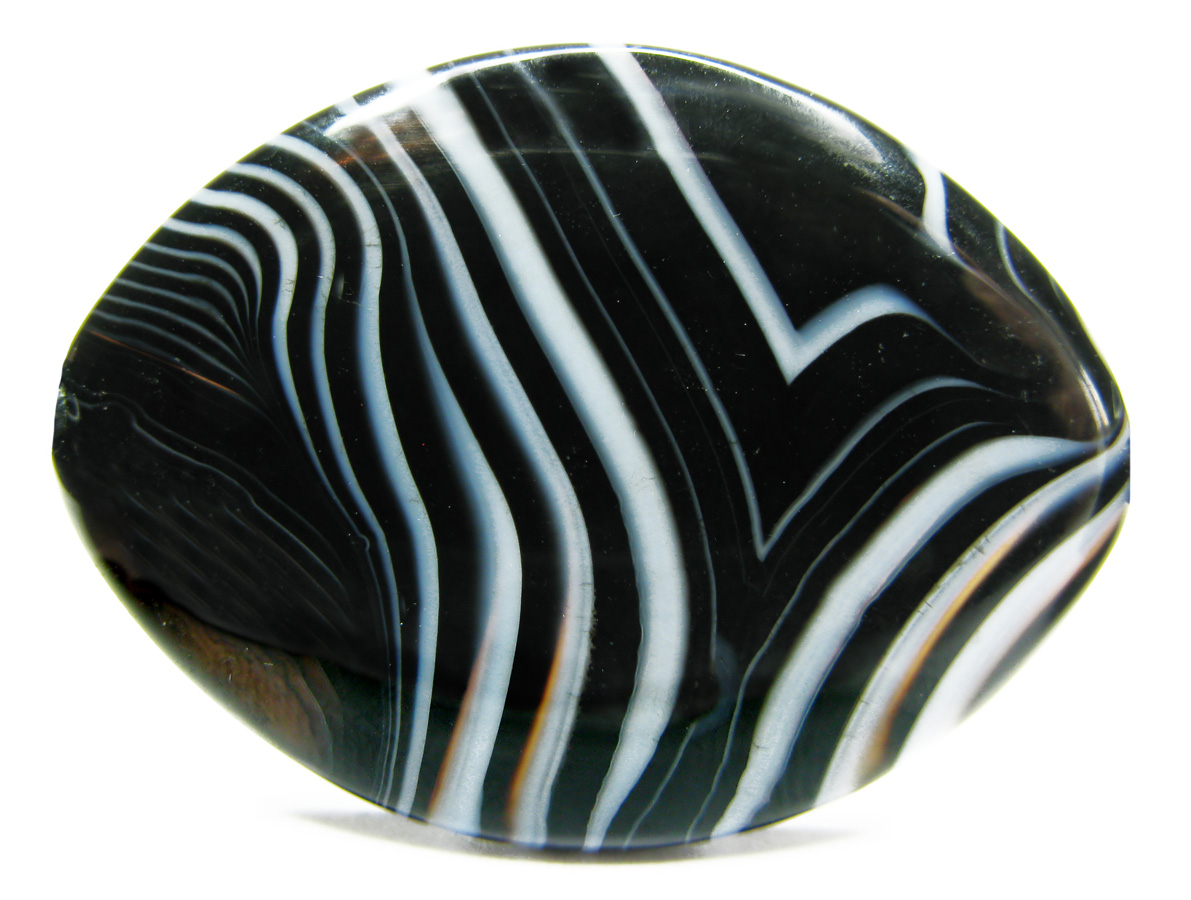 Earth chakra is most closely connected to the black type of agate. The black agate is a spiritual connector, bridging the gap between Heavenly ch’i and Earthly ch’i. It does this by brining energy into the entire Hara Line grounding it into the consciousness and reality of the earth plane. It is also useful for clearing Hara Line energy blockages. Energy transference is a key property, as it allows energy to flow from the head to the feet, and assists in the clearance of emotional pain. Further, it assists in the balancing of Earth and Sky, and increases overall awareness. It also physically reduces the impact of nausea, cramping, and digestive issues. 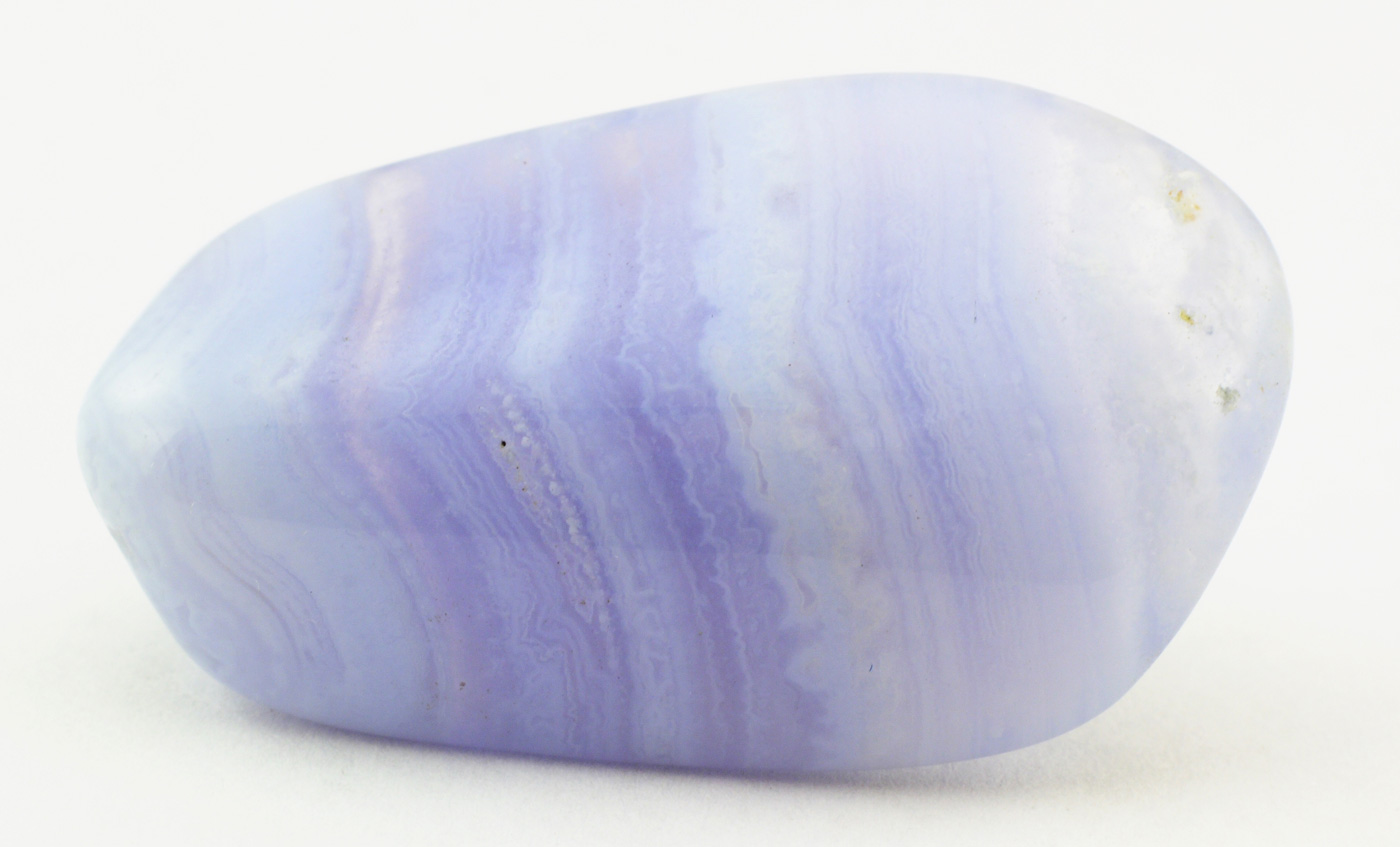 Throat chakra connected, blue lace agate is found in both blue and white colors. The use of blue lace agate helps in the expression of the self and in speaking ones mind. Those dealing with issues of shyness or questioning their self-wroth often find blue lace agate powerful for assisting in emotional honesty and expressiveness. It is also used to program the etheric body for works of creativity. It can also heal laryngitis, and help sore and hoarse throats by opening the voice and soothing. 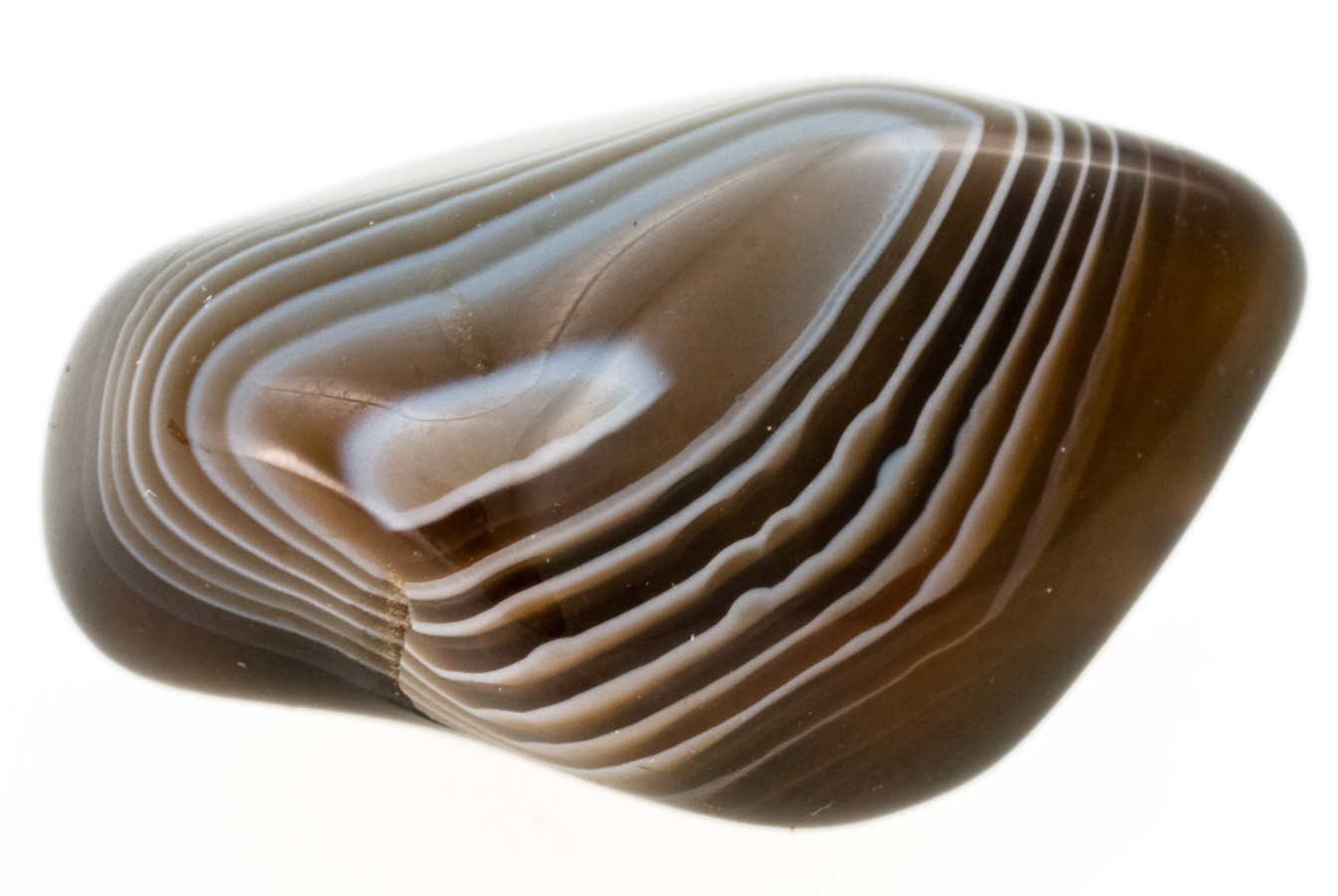 Appearing naturally in brown and white, the Botswana agate is most closely connected with the belly chakra. On the psychic level, this type of agate is useful for scrying and meditation, balancing psychic energy, and slowing down clairvoyance and visions so that they may be more accurately interpreted. It can also assist in dealing with insomnia, assists in the reduction of anxiety in general, and allows the user to more clearly accept the positive nature of their current situation and of their future. Finally, it provides comfort and a sense serenity and security by allowing the user to understand that they are not isolated.

Found in both blacks and whites, bull’s eye agate is closely tied to the earth chakra. It allows for the transference of energy from the spiritual bodies into the earthly and increased awareness by increasing calmness and awareness. It allows the user to achieve tangible goals by allowing them to focus their efforts and energy.

Found in both orange and white, this type of agate is tied to the belly chakra. It is possessed of a herstory of the planet as opposed to that of individuals, making it a good stone for meditation and for scrying. It provides visions of the early world, showing how the planet was formed and how it came into being. 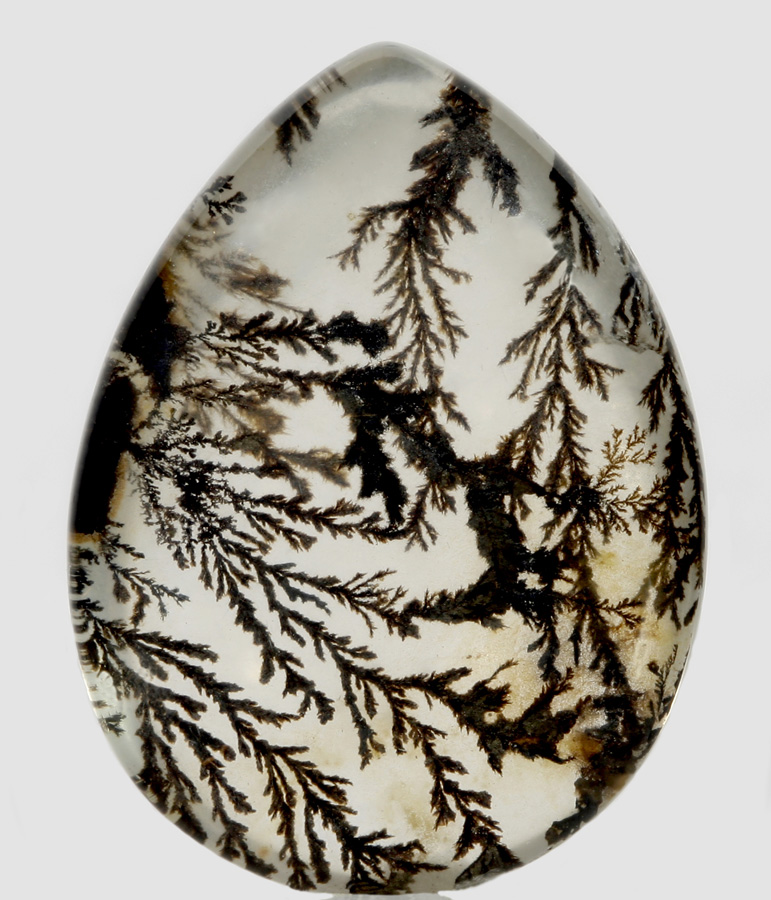 This type of agate allows for the movement of energy from the outer bodies and chakras into the physical level in a downward direction. It allows the user to merge their incarnational purpose with the needs of the planet, allowing them to serve as an environmental servant and opens them up to Earth awareness. This in turn assists in the promotion of activism and increases awareness of the overall consciousness of the planet.

Reddish-orange in color, the Fairburn agate is connected with the belly chakra. In turn, it supports a variety of physical issues associated with the womb, including anything related to childbirth, fertility, and menstruation in general. It also helps to heal and mend emotional issues associated with the womb, such as hormonal imbalances, and general issues of feminine self-esteem and value to ones self. It is one of the more rare forms of agate, and coincidently, the state gemstone of North Dakota.

This agate is related to the hara chakra and is found in both orange and white colors. Energy from the spiritual outer bodies are allowed to flow into the hara chakra through the use of this stone. It assists the user in manifesting their spiritual life purpose into a more tangible goal on the earth-plane. Further, it empowers the will to achieve the individual users karmic agreements for this particular life. Finally, it aids stability, focus, and increases energy and vitality while manifesting the overall goals of the individual’s life. 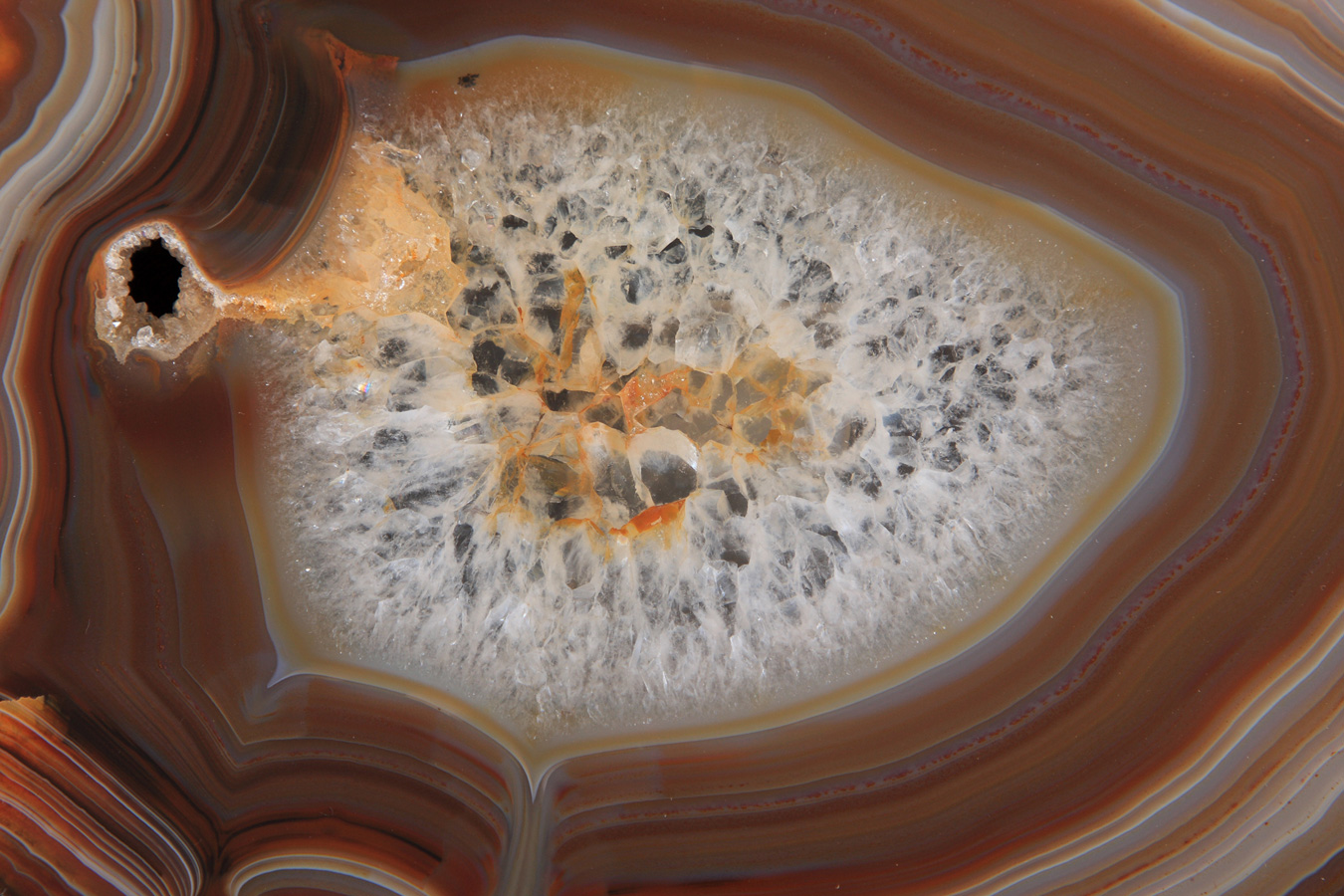 Available in all colors, the geode variety of the agate is tied to earth chakra. It pulls feelings of negativity, pain, and any blocks in energy flow through the chakra and aura layers in order to release them. It is further associated with the withdrawal of negative energy of all types, cleaning all aura energy by acting as a spiritual magnet, drawing the energy into the Earth while cleaning and transforming it. It is a wonderful tool for any individuals working with physical healing arts and areas of massage. Sometimes known as Thunder Eggs, agate geodes are connected to energy healers of all types. 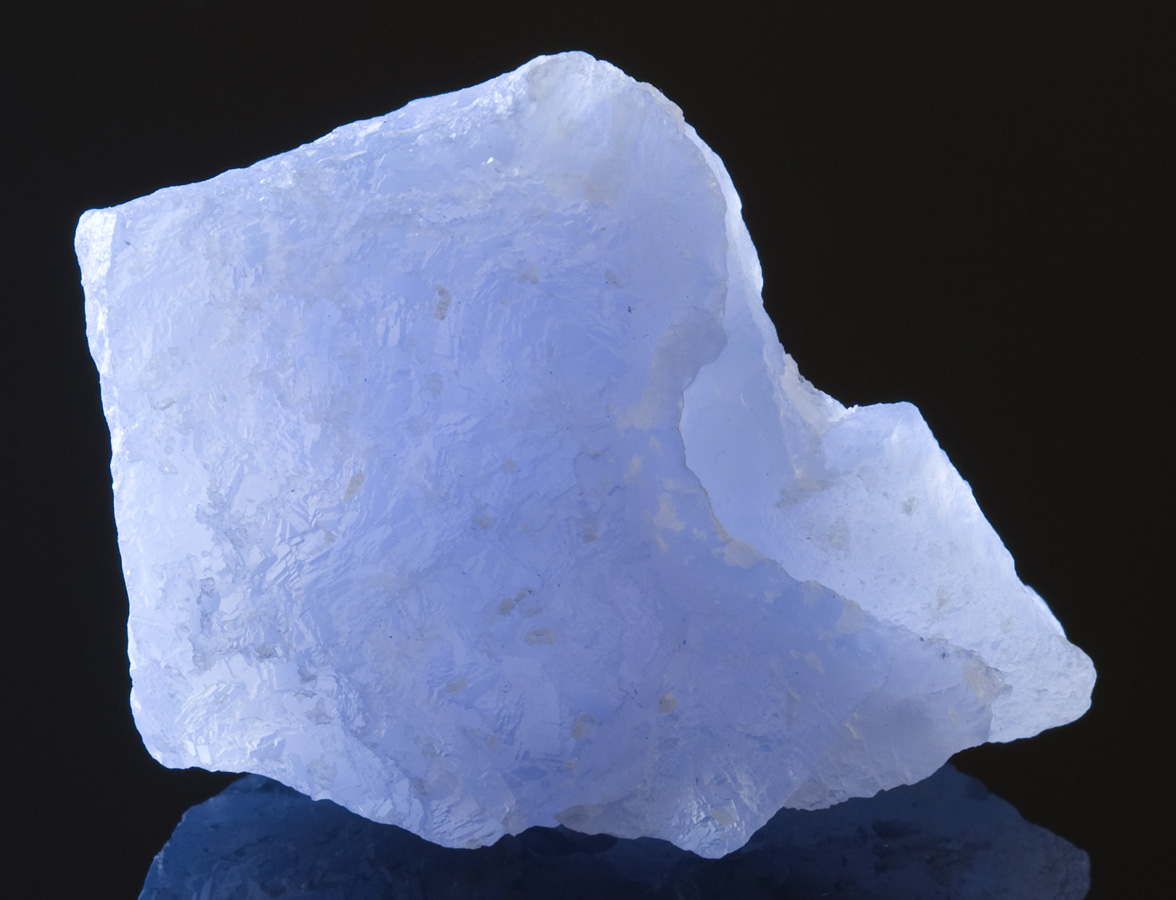 Blue-violet in color, this agate is bound to the causal body chakra. Energy is allowed to move from the higher levels into the physical level with the use of this agate. Additionally, it opens and balances the causal body chakra for the transmittance of spiritual energy. It also serves as a stabilizing force for this energy as it moves into physical awareness. Further, it helps higher-level information progress in such a way as to assist comprehension. Finally, it is a potent tool for focusing the user’s life purpose and karmic learning plan for this specific incarnation into a sense of physical fulfillment.

This is the type of agate connected closely to the chakra of the heart. Protection for the heart chakra is provided by this agate only at the etheric double level. Additionally, it prevents psychic attacks at this chakra level as well. It offers a level of emotional protection, brining positive spiritual energy into the heart chakra, and protecting healers from overwhelming feelings and harmful connections to those that they are helping. It also facilitates unconditional love and helps dissolve negative chords in the chakra of the heart.

A purple and white stone, the Luna agate is connected to the crown chakra. This is a wonderful took for those new to the path, as it allows for the gentle opening of spiritual awareness and of psychic abilities. It is best for providing subtle assistance in accepting new spiritual ways of thinking and living. Further, it facilitates slow forward movement, allowing the user to progress without being overwhelmed. It is also connected to the moon, assisting in a woman’s cycles and moon meditation.

Pink and white, this agate is connected to the heart chakra. It is used to methodically heal issues of the heart, starting at the center of the issue, and slowly radiating outwards to resolve issues layer-by-layer. It helps to replace heartache with happiness, providing a sense of security and comfort. It also helps to reduce stress and allows the user to understand that they are loved, improving feelings of self-love and increasing ones self-image.

Red-brown and white in color, this agate is connected to vision. Potent for meditation and scrying, it assists in reflecting on life in other parts of the universe and in the sea. It is a record keeper of the herstory of the environments and not of the individual. It facilitates psychic visions of all types, including visions of the past, the galactic herstory, and of the creation of the Earth, the planets, and of the galaxy. These visions are often connected with a sense of “going home”.

This agate is connected with the chakra of the root. It assists woman who are beginning menopause and helps to progress through it. It supports uterine fibroids, and assists with heavy blood flow, gaining weight, and compilations related to hysterectomies. It also helps with accepting change of both the physical and emotional variety as it relates to aging. Finally, it helps users to recognize and take their power as a Crone.

This is another type of agate that is associated with the root chakra. Specifically, this assists in balancing the root, the belly, and the solar plexus chakras. It allows the lower chakras to join and to heal, stabilizing the incarnation and reducing negative emotions. It also helps the user get rid of fear and anger, calming agitation and reducing other negative emotions such as greed, jealousy, envy, and anger based outbursts such as rage and vengeance. Finally, it promotes patience and reflection before improper actions.